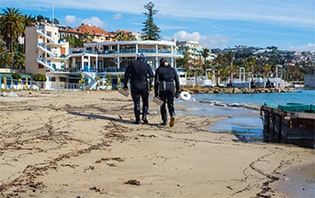 If you fail to appear in court and think you can evade the legal system, think again. A national network of bail recovery agents, or what is portrayed on TV as “bounty hunters,” stands ready to track you down. Many of these agents previously worked as law enforcement officers, so they understand how to find bail jumpers who don’t want to be found.

The bad news is two-fold. First, as long as your bail is outstanding, they will continue to pursue you. Secondly, they are successful almost 90% of the time.

Who hires bail recovery agents, and why do they care that you fled?
Frequently, it’s the bail bond company who took the risk to bond you out of jail and your co-signer, the trusting third party, who signed for your bond. Now that you are a fugitive from the law, the bail bond company and your co-signer are liable for the entire amount of your bail. Both parties engage bail recovery agents in an effort to recover you and their money.

What are these agents allowed to do?
Regulations and laws governing the scope of agents’ power and reach differ from state to state. Some states require bail recovery agents to be licensed, while others do not. Other jurisdictions allow agents to arrest those they are pursuing, while others, such as Kentucky, Illinois and Oregon, require that only law enforcement officers make arrests. But, as a fugitive, you need to know that almost all states allow bail recovery agents to operate in some capacity.

Be aware that these agents have the right to enter your home in most cases and use force to capture you. However, the use of excessive force against you, the bail jumper, or innocent bystanders can result in charges being filed against them.

If you are wondering why these agents are motivated to look for you, the answer is money. While some of them charge a flat fee for their services, most work for a percentage of the total bond amount plus expenses. However, they may receive nothing if they fail to apprehend and capture the fugitive – you.

As a highly experienced bail bonds company, we will not treat you like a number and will offer you the highest level of personal service possible. It’s important to understand that many cases can be reset, and we can help you through the process of getting that done. Communication, cooperation, honesty, and quick action are all successful elements in getting you back on the right track.

Even if you’re afraid that a bail recovery agent could be on your trail, we’re on your side and will help you in your time of need.