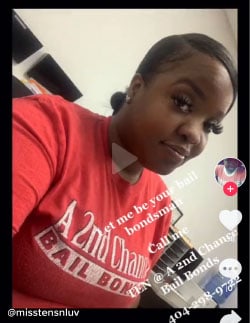 To meet her, you’d think you had encountered an intelligent business professional with an upbeat attitude. You’d be right to assume that, but you’d probably never guess what she does for a living. Social Media Maven Tenithia Robinson is a New Business Ninja for A 2nd Chance Bail Bonds.

If you think being a female bail bondsman is a rarity, think again – 40% of bail bondsmen are women.

How did Tenithia get into the bail bonds business? The answer is she had a bit of “bondsman envy” when her brother, Lucius Robinson, who also works for A 2nd Chance, shared his job talk at the end of the day. “My brother talked about what he did at A 2nd Chance and his work sounded fun,” she said. ‘’When I applied, I didn’t tell him, so he found out when I walked in on the first day.”

For the past five years, Tenithia has built a presence on a variety of social media platforms as “Ten,” someone who can spring your loved one from behind bars anytime day or night. Look for Ten on TikTok and Facebook, where she invites jailed individuals to call her for help with the tagline, “Tired of being in the Pen? Call Ten.”

Tenithia has not only mastered the bonding process, she understands what her customers and prospects need too. “It’s pretty rare that someone needs bail between nine a.m. and five p.m., so I’m open and ready to help anytime day or night, seven days a week,” she said. “My customers love our ability to post bail digitally. They don’t even have to leave home to get a loved one out.”

During Tenithia’s seven years as an A 2nd Chance employee, she’s worked in the Fulton County office, been promoted to the office manager for the Dekalb operation and is now a Lead Bailbondsman serving the Atlanta metro area.